The Shadow of the Wind Review

I finished reading The Shadow of the Wind by Carlos Ruiz Zafón close to sunrise. I had woken up at midnight, and in an inefficient effort to lull myself to sleep, I read myself to a plot twist and had to keep going.

In Barcelona 1945, David Sempere finds a book by Julian Carax. The book reaches his hands like a handsome mystery. Now, a posh book collector wants the book. An aggressive policeman wants the book. A stranger with a burned face wants the book. David can’t let the book go. Instead he seeks out the book’s author who is at the centre of the strangeness. 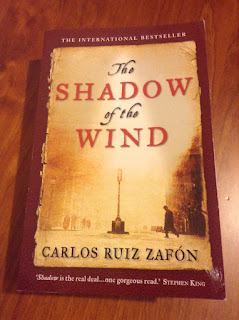 I will not say any more on the plot. Imagine this book like a parcel with a thousand intricate folds in the wrapping paper. It’s a mystery that needs to be unravelled by the author, and only him. I knew I would struggle to review a book that is written so elegantly and so fixed in place and time. It feels odd to try recreate some of the magic here, on my laptop, in Brisbane.

The thing you must know about The Shadow of the Wind is that it demands to be read once you start. The words roll around your tongue. The book paints Barcelona from people’s faces. I encourage all gothic mystery enthusiasts to visit Zafon’s Barcelona, and tell me about it on your return.

Books are mirrors – you only see in them what you already have inside you.

Review of Binge by Tyler Oakley

Well hello everybody welcome to the Tyler Oakley fan club!

Tyler Oakley, Queen of the Internet, has slayed anew. His book Binge was an experience. The book felt like talking to a best friend at a sleepover, all the secrets, all the sassy, even a few magazine quizzes to boot! 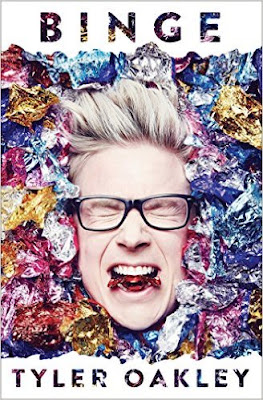 Tyler was more open than I thought he would be. The first few chapters in particular went in depth into Tyler's early years and eating disorder. That chapter and his coming out story really affected me. It is difficult seeing someone so ordinarily happy and vibrant dim a little without them knowing. Nevertheless, it made Tyler the person he is, just as the fights he had with his dad strengthened their relationship.

What is a Tyler Oakley book anything though without a bit of sass and shade. His Beyonce-for-the-day musings were insightful. The amazing revenge story for a boy pretending that Tyler and he were dating (not to mention the amazing photos of Tyler dancing with said boy's mum, knowing full well that she would beg the boy to marry Tyler in future). He is here to live his life and doesn't care if you like it! (But you probably will because he is hilarious.) 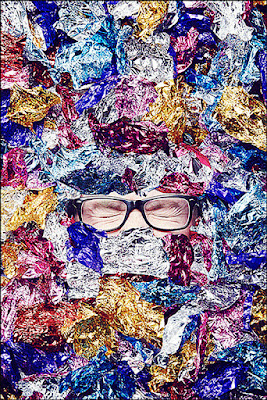 If you need a pick-me-up or want to lose yourself in the fandom please pick up this book! Indulge a little ;)

Review of We Can Work It Out by Elizabeth Eulberg

Status: bought in hardback and back on the shelf.
Rating: 3/5 stars 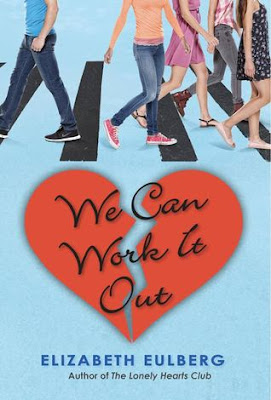 We Can Work It Out was not the best follow up to a brilliant debut novel. We return to the cast of The Lonely Hearts Club, the fam, if you will. Penny Lane Bloom, pioneer and Queen is finding having a boyfriend difficult to balance with her commitment to the Club. Tracey is being courted against her will. And Diane is perhaps too close to Ryan, Penny's boyfriend. All great set ups for a story-after-the-happily-ever-after, but perhaps I had my expectations set too high.

Don't get me wrong, there were many parts of the book I loved. The Nate shutdown take two with Tracey was epic. The obligatory Beatles birthday. The hilarity of awkward situations Penny finds herself in. What this book lacked was the originality of the first book and its wow factor. Many authors struggle with this particularly when returning to a world they left behind long ago. It is difficult to breathe life into the characters again and I don't envy the author that task.

Overall, read this book if you're curious what happens after but don't expect the same freshness of The Lonely Hearts Club.

Favourite quote:
Members are required to attend all Club meetings on Saturday nights. No member shall wuss out on attending due to a date with a boy. Exceptions are still for family emergencies and bad hair days only.
Posted by Unknown at 01:00 No comments:

Review of I’ll Give You the Sun by Jandy Nelson

Jude and Noah are the twins of a dreamer and a realist. They grow up within these poles never knowing that their world would break. When Noah is 13 he falls in love with a boy. When Jude is 13 she does something terrible to Noah. And their mother does something terrible to them. And their father to their mother. In a few years Jude will wake up and see their messy lives and will try to piece the world together again. 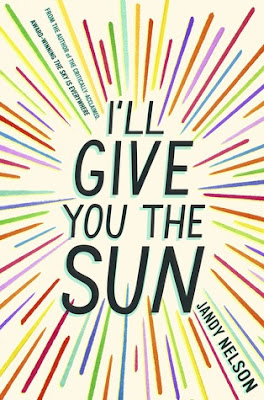 Lots of people - myself included - Jude and Noah have a strange fascination with the bond between twins. I have had the pleasure of befriending a few twins and while they fight like any other siblings, they are always each other’s protectors. Jandy Nelson creates the twins’ relationship with their games, traditions, ghosting their similarities. Following their lives, Nelson captures something very special - as close as I will get to understanding that ethereal connection.

I greatly enjoyed this highly acclaimed read. While it had the humour and lightness inherent in teen fiction, the characters had depth and matured as the book went on. As promised in the blurb, I did at one point laugh and cry at the same time. I loved both completely different POVs, especially Noah’s way of labeling the still images of his life. This is a book I will be recommending to everyone to not only read but to buy. It looks so pretty on the bookshelf :D

Hello and happy holidays! Here is a little gift guide for your bookish gifting needs this year.

For the trend follower
Colouring books, most people will admit to owning one these days. To make your gift special though, choose a themed colouring book such as the Harry Potter colouring book for the Potterhead or a famous landscapes for the traveler. 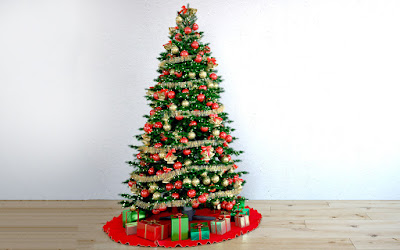 For the series lover
There are heaps of fantastic series ending this summer. The final books of the Obernewtyn chronicles and the Lunar Chronicles are top picks for my YA loving friends.

For the internet kid
All of the Youtubers are releasing books at the moment. I'm most looking forward to reading Tyler Oakley's Binge and Miranda Sing's Selp Helf, two books sure to provide a bit of backstage access to fans and much laughter.

For the classics collector
Keepsakes are often overlooked as gifts but getting someone a story that they already love is a foolproof gift idea for a collector. The Harry Potter illustrated edition was released recently as well as many classics,

For the knick knack friend
Go into any good bookstore's gift section and you are sure to find a nerdy gift. Whether it's a miniature Game of Thrones figurine, a waterbottle with the orange Penguin Classic cover of Lost Girl, or a calico bag with the eye of Big Brother. I love so much of this merchandise.

For the funny one
Comedien books are also a great gift idea. Some of my favourites include Amy Poehler's Yes Please and Miranda Hart's Is It Just Me. A recent bestsellers I would love (hint hint family) is Aziz Ansari's Modern Romance.


If you have any more suggestions, leave them in the comments. Enjoy the festivities :)
Posted by Unknown at 22:51 No comments:

I went to see the final HG movie with my sister this week. This final film promised big action, a final hunger games with the Capital as the field, and some decisions about Peeta and Gale. Katniss has just recuperated from a near fatal attack from Peeta and now must take her place as the Mockingjay on the frontlines of the war. However, President Coin has other ideas for her as does President Snow.

It was a fantastic adaptation from book to screen keeping the important scenes untouched, like the ending, and strengthening minor storylines, such as with Gale, through the movie format. Fans of the book will be impressed, as will fans of the movie franchise. As a loyal fan of the books, I was just so happy to see the final battle realised and Katniss and special someone fall in love.

Jennifer Lawrence is inseparable from Katniss Everdeen onscreen. She is fierce and selfish. Scared and kind. Katniss is one of the most complex heros you will find in young adult fiction. The cast of secondary characters including wonderful Primrose, sassy Haymitch, and cruel genius of Plutarch populate the realistic dystopia. I always recommend the Hunger Games books to non-readers as thrilling and complex storylines sure to interest a wide audience.
Posted by Unknown at 05:35 No comments:

Review of 1984 by George Orwell

I love a good dystopian, particularly one created by a master. 1984 is a dark dark place for Winston and his fellow comrades. Winston feels isolated from the messages of Big Brother; his work "correcting" records at the Ministry of Truth, which actually involves Winston erasing history, prevents him from swallowing the Party's preaching. Simply by doubting the Party, Winston commits thoughtcrime. He must be caught. 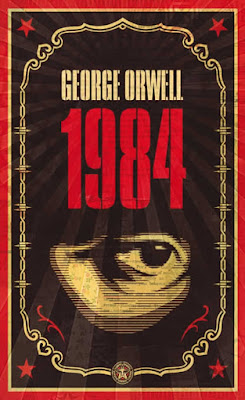 Orwell injects fear into each scene, a feeling of being watched by Big Brother and the inevitability of capture. The beginnings of love in the meadow scene was like the drip of light in a dark forest. He uses words precisely. For instance, Winston describes himself as gelatinous; tired, transparent, nervous, shaking. Orwell certainly uses juicy language to keep you entertained throughout a relatively slow-moving plot.

Orwell's world is so thorough, it includes new language, government, ways of thinking. I thoroughly enjoyed learning about the world. The ending, however, left me unsatisfied. I didn't expect a happy ending - Winston's pessimism did not lead me to hoping - but I did not really understand the ending. I think it requires a reread at some stage.

Favourite quote:
Almost as swiftly as he had imagined it, she had torn her clothes off, and when she flung them aside it was with that same magnificent gesture by which a whole civilization seemed to be annihilated.